Laura & her Welsh Cob mare Taz do it Bitless & Blinkerless!

What a week for Taz and me!

Following our go at an indoor driving trial HC in March (see previous article) I was told outdoors was out of the question !!!

Last week I got a phone call out of the blue from the chairman of the club asking if I wanted to take part in an outdoor evening club event in July.

Well when I could finally talk coherently (well as coherently as I ever do), I said yes please!!!!!! 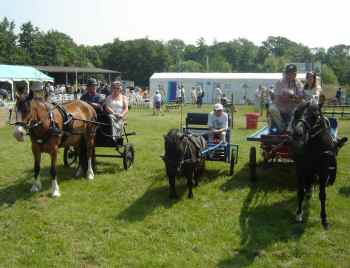 I have just spent three days at the Three Counties Show (BIG countryside show for Herefordshire, Worcestershire and Gloucestershire) in Malvern.

Well somehow I wrangled to get there and get involved, via my instructor, in a driving Le Trec mini competition / demo in the countryside arena.... in our bitless open bridle. Le Trec is basically a drive around some countryside finding your way with the help of a map and passing checkpoints at optimum times. Closer to the optimum time better the marks.

There are 10 tasks to do simulating you might have to do in everyday driving on the road, especially when there is not a straight, trafficfree, problem-free option eg turning on a sixpence because you might need to turn back on a narrow road! The tasks are marked dressage-style for the skill of horse and driver (Whip) demonstrated in carrying out each task. Timing can also be a factor.

Basically it was also showing folks you don’t need posh clothes, posh horse or even to be able to ride to have fun with gee gees!!!

As the demo was taking place in a smallish arena the cross country bit was out of the question… so 7 obstacles / tasks were set up with six turnouts "competing". The judge was a well known showing judge and the organisers were taking it all very seriously!

No practice allowed, straight into the fray...

We were first in and thought we did a presentable, but nothing special, go round the course…. considering I was "in the mix" with the BDS Area Commissioner my only objective at the time was not to disgrace us and to prove I had "control" and was safe in a BB...

So you can imagine my shock when, after two heats, I was second place. I had more points than the AC... do you think I might have made my point ?????

and some different competitors... including the local BDS show organiser with a feisty-looking wee pony.   Uh oh... harder competition today.

The showground was busier with hounds and gundogs in and around the collecting ring, hot air balloons going up and parachutists (red devils I think) coming down. There were traction engines chuffing and the music of the fairground not far away, paintball and air rifles popped… and through it all they stood calmly waiting their turn!

Our scores and times were getting better and better but my jaw hit the ground when after the first heat I was ...

He put in a brill second round and jumped into the lead... we bantered in the collecting ring as the friendly rivalry heated up LOL.

We were larking around in the collecting ring (it was all good-natured fun) and I went for it and asked if he thought I was safe enough to come to BDS events then ...and he said he would give us a chance to show what we can do, and that I would be welcome at the autumn show he organises. So peeps... hope dawns brighter... 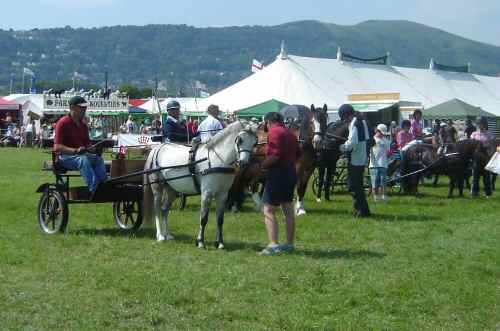 I had planned to use the third day to go round the showground and perhaps see some of the other displays and trawl the tradestands as the third days demo was being done entirely by Warwickshire Driving Club... but one of their turnouts didn't turn up... so I was called out as reserve and we were in the competition for a third day !!!

Thought REALLY uh oh as I had been told they were "serious" about it all and would be dressed to the nines... Well they were dressed up and I WAS offered a driving apron to wear. I declined as it did look a little out of place with jeans, rugby shirt and trainers!

My fears proved to be unfounded as they were actually a great lot and their organiser / leader did not bat an eyelid at all when I told her Taz was bitless!!!

Off we went again with a more vital introduction of TIME... points not just for skill but we HAD to stay in trot... not to much of a problem except the arena was rather small with 8 obstacles including doing a one-handed circle (normally  minimum 20 metres and we barely had half that room!) and a slalom course that was tight even for the little uns... that day all the others were Shetlands and Taz looked gigantic next to them... her long Welshie trot was certainly NO advantage here... plus the day one winners were back again!

Taz seemed a little tetchy ( *!?* ) as she was just coming into season and had fallen in love with a gorgeous Highland lad left back at the stable !!!!! Och wel... we had done far more than I had hoped for so just went for it!

Well blow me down with a feather but after the first round - three of us all in equal first place.

Heats 2 and 3 were all good-natured but keenly fought and we had no idea till we were all parading round at the end who was placed where. We kept waiting... and waiting...

Then to top it all... an invite from the Warwickshire organiser to come to the Autumn Three Counties Show and take part in the horse class of the Le Trec competition / demo.  She said we would be welcome at any of the events she organises!

After sooooooooo long in the wilderness... at last  a few helping hands with smiley faces. I feel that at least I know that "on the ground" there IS increasing support in our quest for acceptance of Taz’s headgear even in the driving world.

<<back to Articles Index